In one of my previous post I elaborated basics of JVM memory and also explained how garbage collection works. In this post we will try to understand various types of GC and how to tune and optimize them with a real world example.

When garbage is collected from Young space it is called Minor GC.

When garbage is collected from Old space it is called Major GC.

When garbage is collected from entire heap i.e. Young and Old spaces it is called Full GC.

In nutshell we can infer that Major GCs would be an outcome of number of Minor GC. From performance standpoint what needs to be closely monitored and analyzed is - whether a GC had suspended application thread (i.e. STW) and what was the time for suspension. As this may have larger ramifications on throughput and latency of application. 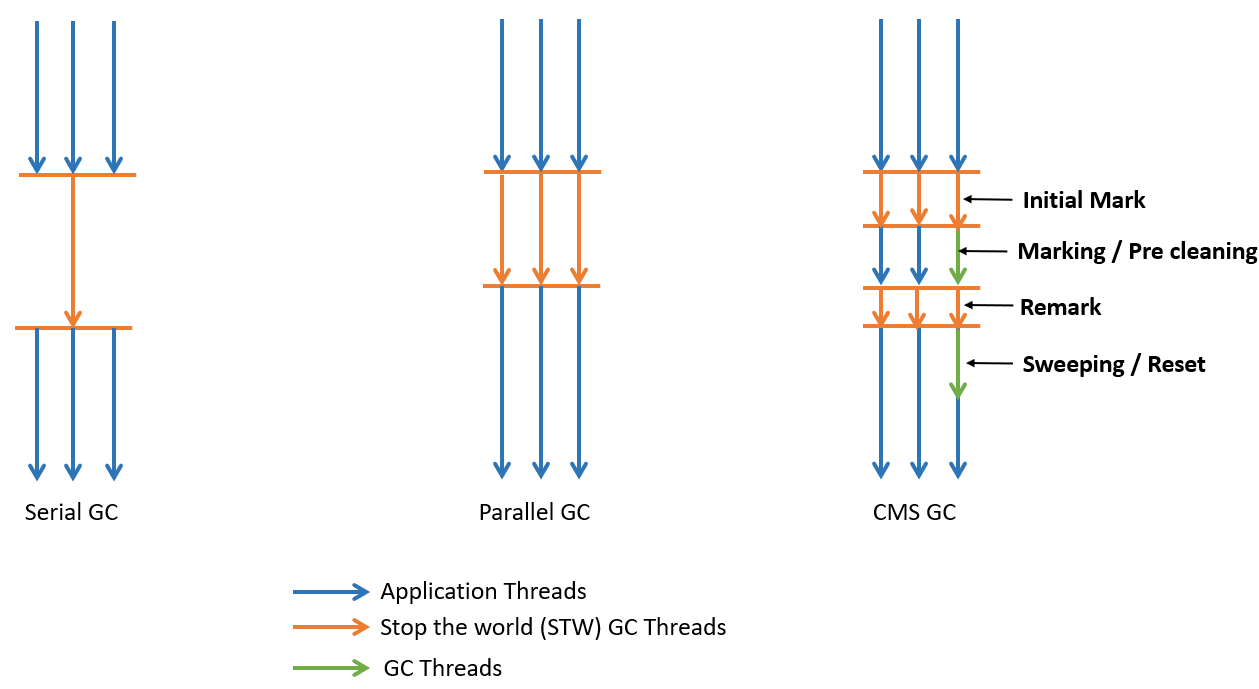 As the name implies, this garbage collector is incapable of parallelizing the GC task at hand. Basically it is recommended for environments which has few hundred MBs of memory and a single CPU. They will trigger STW pauses and thereby suspend all application threads.

The default value is equal to the number of cores of the machine in which application is required to run. Till JDK8 Parallel GC is the default GC algorithm for any application.

Looking at the above phases one can easily make out that this is designed to avoid long (STW) pauses whilst collecting in old generation. This is the recommended choice for multi core CPUs and also for applications which are latency sensitive.

Before we understand nuances of various GC parameters to tune, lets try understanding facts pertaining to GC overheads. The two biggest contributors to GC overhead are -

1. Allocation Rate - It is memory allocated per unit time. It can be calculated as difference in size of Young Generation after the completion of last collection and before the start of next one. An excessively high allocation rate may have dire ramifications on performance of your application. It primarily has to do with Minor GC i.e. Young Generation. However it may have an implicit impact on Promotion Rate. Logically one may want to think that if there are issues with allocation rate than one must blindly increase the size of Young Generation i.e. Eden space. However, that's a misconception, as if problem is really genuine, than we are just deferring the actual problem and not solving the root cause by doing so. Below are the key JVM flags that can be considered for troubleshooting allocation rate issues -

2. Promotion Rate - Amount of data (i.e. size of objects) propagated from Young Generation to the Old Generation per unit time. In the JVM world its a norm to have long lived objects getting promoted from Young Generation to Old Generation. Relatively speaking promotion rate has more dire ramifications on performance of application than Allocation Rate. And this is due to simple reason - promotion rate is directly proportional to frequency of Major GCs. Now this is quite evident from the fact that, the more JVM promotes to Old Generation, the faster it fills up. The faster Old Generation fills up, frequency of Major GC to clean up Old Generation will substantially increase. Due to (mis)configuration it may happen that short lived objects are not collected in Young Generation, but instead they are promoted to Old Generation and are getting garbage collected via Major GC - this is known as **PREMATURE PROMOTION. **And this may lead to longer pauses of application threads due to frequent Major GCs. Symptoms of Premature Promotion -

JVM flag that can be used to manage promotion rate

In one of the application which was in production for more than 4 years with moderately high adoption, I was primarily responsible for optimizing performance of application. As part of this exercise, I took this opportunity to understand its GC behavior. Below are the findings and inferences based on GC reports (generated by importing GC log file using GCEasy.)

Whilst skimming through performance reports and some of GC logs, we observed that allocation failures were happening in large proportion ~ 90%.

Lets try to understand - What does that mean and how does it impact performance of application.

We looked at Allocation Rate which clearly indicates that while new objects are being created and old objects are moved across Young / Old generation, JVM might end up in state where it is unable to create new objects as the memory is too less / too fragmented. In both the case, GC will be triggered and hence GC events, which will impact throughput and latency of the application.

Above report indicating high Allocation Failure is due to high fragmentation in memory and hence GC needs to be triggered. So we started analyzing GC behavior and thereby found out that application was using default GC i.e. Parallel GC, which can have latency issues. So we decided to change its algorithm to CMS and then analyzed GC logs. Below are the readings after changing from default GC to CMS GC

Considering this gain in lower environment, we pushed GC related changes to production. And in spite of full blown performance testing in lower environment destiny had something else in store for us :) When we started analyzing GC logs from PROD this is what we saw in its reports :(

Significant observations that may have impact on performance of application -

We again started analysis of different flags available in JVM for optimizing CMS GC behavior. As part of analysis we came across below mentioned flags 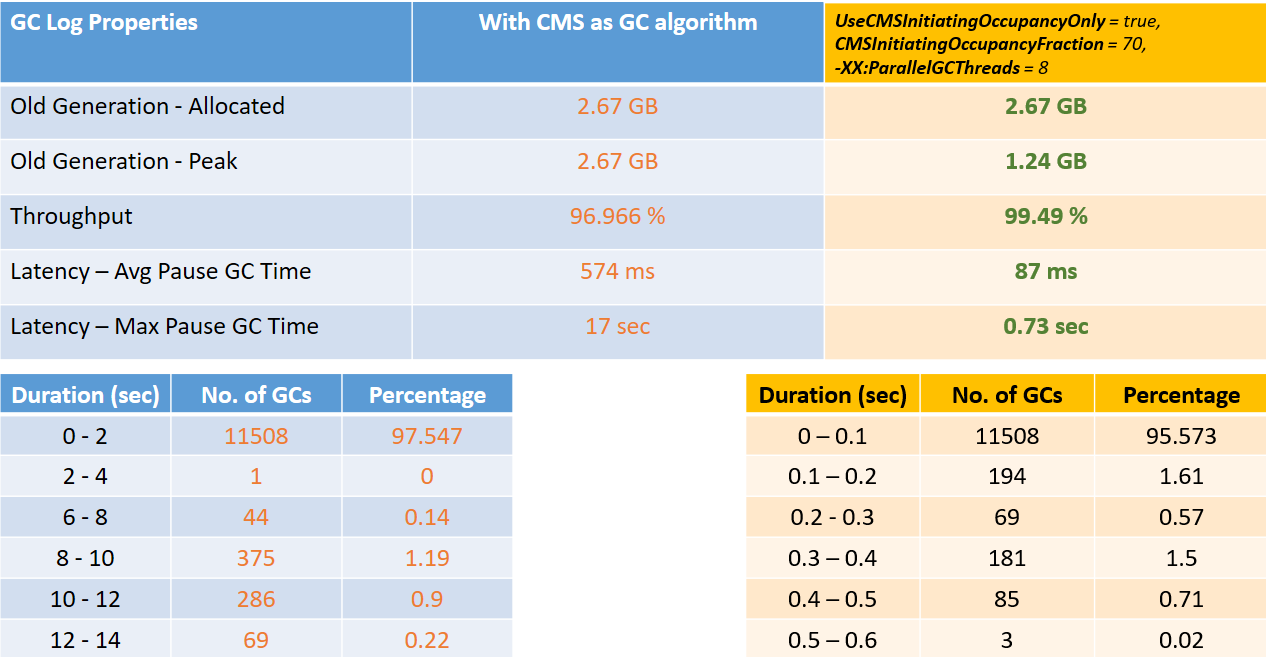 These are indeed huge gains as compared to initial readings which will positively impact performance (i.e. latency and throughput) of application in general.

We saw from above readings that tuning application's GC requires detailed understanding of nuances of Garbage Collection. Needless to say that one needs to adopt a slow and iterative approach to find the right values of configuration as it is very specific to the nature of usage and business complexity of application.

P.S - There are couple of more flags which can be considered based on the need of application i.e.

It indicates garbage collector to collect young generation before doing Full GC or CMS remark phase and thereby aid in improving its performance due to absence of need to check references between young generation and tenured.